We’re sort of old-fashioned that way. The way we close our Sunday worship time with an invitation to pray. Not the sit-in-your-seat-heads-bowed-eyes-closed kind of prayer. Well, that, yes, but also the kind of prayer that brings some people to the front of the chapel to kneel before God and their peers. That kind of old-fashioned invitation that isn’t always common these days. It’s not easy to make that walk. The one that has you making your way across the legs of the others on your row to walk down the aisle and lower your body in that position of humility that is nothing but strong.

We came up this way, my husband and I. I remember daddy leading that final song on Sunday morning, so often it was ‘Just As I Am’ or “Have Thine Own Way”. The annual youth weekends with several hundred teenagers always had that Sunday morning altar call. We knew it was going to last for-ever and tried to volunteer someone to go forward to get this thing started because no one was leaving this room until someone went to that altar!

It was the same way at summer camp and Men’s camp and Women’s weekend: come, come forward and pray.

In the traditional church setting weeks could go by with no one coming forward or the one little old person who knelt every week. But it’s different in this community of men fighting addictions of all kind. There is no hesitation when the word is given to come forward and pray for others, for yourself, bring your troubles and joys to God, here. At this mercy-seat. 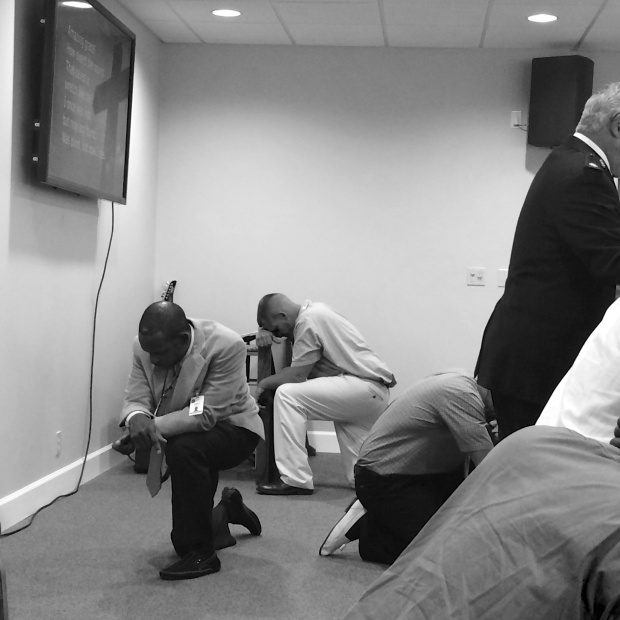 And they do. One after the other. I figure some are doing it thinking it might score some kind of points with “the Major”. It’s more show than heart but that’s not my concern. God will sort that out.

It was one of those weeks and Michael said it after the service when he turned to me and said, “There was power in here today”. Yes, there was. I felt it when the one I didn’t know stood to give testimony of God using another man to keep him from temptation. I felt the power in his weak voice as he struggled to tell of his fight for sobriety and I felt the power when so many men came forward to pray there was no room at the altar but they came anyway. That one came, on the platform to kneel, off to the side where a rail was covering some instruments. Another came with no place left to lean, and simply knelt in the middle of the floor. That position that could look weak to some, the body lowered to the floor, screams strength to me. God’s strength enabling them to bow without shame, and call on God.

Our prayers are heard from any position. Eyes open or closed. Head bowed or raised. Standing or sitting. Whispered or yelled or sung or silent. I’ve heard a man who would get overcome with laughter at times during prayer and John, John signs his spoken prayers.

5 thoughts on “An old-fashioned invitation”

We'd love to hear your thoughts. Thanks! Cancel reply

This site uses Akismet to reduce spam. Learn how your comment data is processed.

“To live by grace means to acknowledge my whole life story, the light side and the dark. In admitting my shadow side I learn who I am and what God's grace means.” Brennan Manning